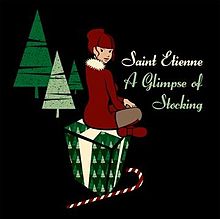 Each year, radio stations bombard us with the same lame Christmas tracks, November through Christmas. Today, Rooms with Brittle Views compiled a list of Christmas – Songs To Save Your Sanity, and The Metro wrote an article called It’s beginning to sound a lot like Christmas that discusses how radio stations are playing Christmas songs earlier and earlier each year. But not all is grim.

Saint Etienne have a Fan Club called Lover’s Unite that has released exclusive CDs for over a decade now, and they have always been top quality, and highly collectible as well. But as our beloved band seem to be winding down after all their records received expanded edition reissues, fans wondered if there would be new stunning Fan Club releases. A Glipse of Stocking is that stunning release. Some labels have put out imaginative and original Christmas compilations for years. Madrid’s Siesta Records have released memorable records for 20 years. In 1997 they released Christmas Single #1 from Free Design, and a year later, Christmas Single #2. In 2002 they released the compilation fantasÍa de navidad. All these releases contained magic, and would be hard to hate, no matter what your taste in music normally sought out. Similarly, Welsh Ramones-channelling all-girl band band Helen Love released the single-sided, etched

Merry Christmas I Don’t Wanna Fight 7inch in 2002. But to me, the king of Christmas compilations will always be The World In Winter, a comp put together by Mike Alway for his El Records. 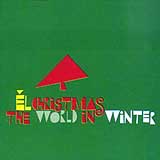 ‘The World In Winter’ seemed to get everything right. It was a CD you could listen to, not just play select holiday tracks from. Not to say all “select Holiday tracks from” CDs are bad…. Peter Katis runs Tarquin Records in Greenwich CT. The label is named after his son. Peter plays in The Zambonis, and other bands as well. He put together the Gold Standard as far as Holiday CDs you play a single track or so from, The Tarquin Records All Star Holiday Extravaganza!. Not only does this CD have some AMAZING Christmas songs, such as ‘R2D2 We Wish You A Merry Crhistmas,’ ‘Flexible Flyer’ and ‘Snowflakes,’ but it also covers many other holidays including Groundhog Day (‘I Am The Ground Hog (And It’s My Day)’), Halloween (‘Mischief Day!’ and ‘Halloween’), and others. Check this CD out! 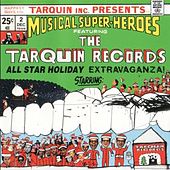 Saint Etienne have made a welcomed entry into this market with A Glimpse Of Stocking. The CD has 15 tracks. ‘Gonna Have A Party’, ‘Welcome Home’, ‘Snowbound On The Southbank’, ‘Fireside Favourite’, ‘No Cure For The Common Christmas’, ‘Wintertime Love’ and ‘Unwrap Me’ are exclusive to this record, the rest were released on long out-of-print Fan Club records from the past.

The CD starts off with the italo disco sounding ‘Gonna Have A Party’, which uses auto-tune on Sarah Cracknell’s voice, which is slightly disconcerting, but works well in the context. 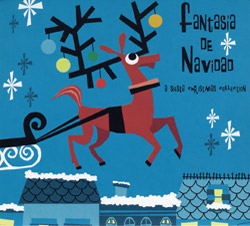 ’21st Century Christmas’ has verses sung in a talking style similar to ‘Schoolgirl Psychedelia’ by Fantastic Everlasting Gobstopper, from The World In Winter comp, though the chorus and bridge as smooth-as-silk Saint Etienne butter.

‘Driving Home For Christmas’ incorporates elements of the tune from Wham’s 1984 track Last Christmas in a subtle way, making a song that is both instantly familiar and something new.

‘Welcome Home’ has a familiar Saint Etienne sound. ‘Snowbound On The Southbank’ is a short instrumental with guitar and flute, sounding like a walk at night while it is snowing. ‘My Christmas Prayer’ has Sarah crooning over a programmed drum track in a 50’s reverb style. ‘I Don’t Intend To Spend Christmas Without You’ was also covered by Loveletter (The King Of Luxembourg) on The World Of Winter. ‘Come On Christmas’ sounds like ? & the Mysterians with the music of ‘Louie Louie.’

‘Fireside Favourite’ is a short wordless vocal track with accordion. ‘No Cure For The Common Christmas’ is another highlight, a euro-disco sounding Saint Etienne original sharing kin with ‘Like a Motorway,’ and baring more than a passing resemblance to the vocal sound of Sarah Nixey in Luke Haines band Black Box Recorder. ‘Wintertime Love’ is a Doors cover! It has a whimsical sound, and is a very interesting addition to the amazing breadth of Saint Etienne’s discography. ‘Unwrap Me’ is a Saint Etienne original that reminds me of Marilyn Monrow in the breaty sexiness of the vocal. The music has upright bass, brushed drums, piano and a harmonica. The disc closes with ‘Snow,’ a Rany Newman track popularized by Claudine Longet, that is reverent and fantastic in its own right. What a record!

Most Favorite track: 21st Century Christmas
Other faves: Gonna Have A Party, I Was Born On Christmas Day, No Cure For The Common Christmas, Wintertime Love, Unwrap Me, Snow