Gary Crowley created stirs with his Lost 80s and punk and new wave sets, but before that, in 2004, he released a set ‘Where The Action Is! (40 Mod, Soul, Ska & R&B Classics From The Sixties!)’ on Discotheque/Sanctuary. It was build on an interesting concept, one CD of the first wave Mod bands, and the second CD the original R’n’B artists that inspired them. Today’s show mines both discs, throwing a few odds at the end of the second hour as well. The Charles Dickens track ‘In The City’ is going through my head right now. 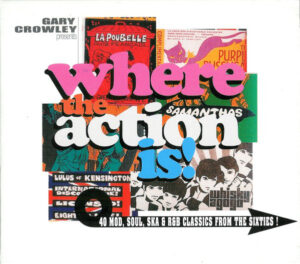